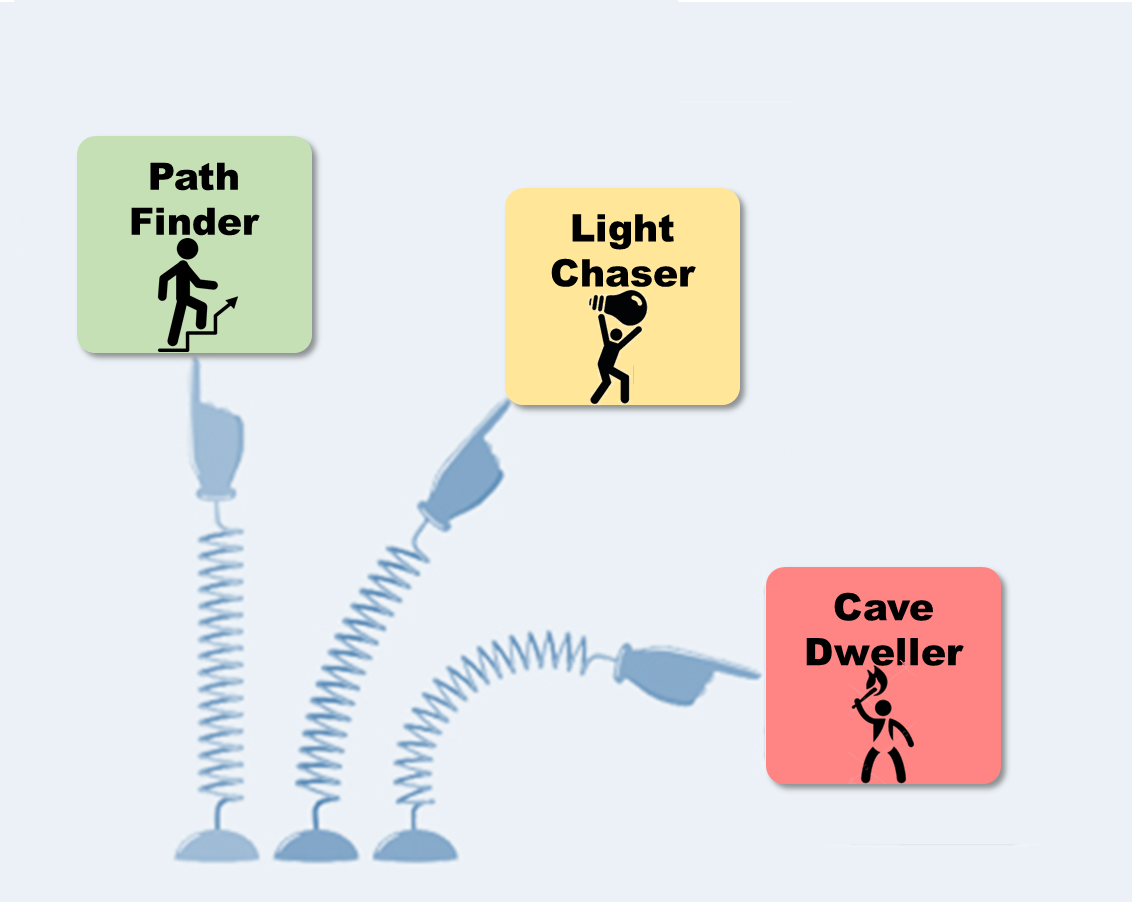 There is solid research showing that transforming toward becoming more digital pays off with huge dividend. How this possibility is realized or lost depends on behavior; which can be categorized into three groups: 1) redefine and reposition, 2) adopt best practice, and 3) business as usual. Each one of them is believed leading to a certain result: You win, you follow, or you lose.

So far, this analysis answers two questions: 1) how companies drive or react in regards to opportunity and 2) what the result is likely to be from each type of behavior. But it does not answer the question: Why?

There is a stage before behavior, known as attitude. Guided by experience from meeting with 1000s of managers ranging from CEOs to process owners and supervisors I have found three distinctive attitudes that can be labeled: Cave Dwellers, Light Chasers, and Pathfinders.

This attitude reminds us of Plato’s 2,300-year-old allegory of the cave. In Plato’s story, we are all chained in a cave for eternity with our faces toward the wall. Behind us, stick figures are dangled in front of a candle, so shadows are the only reality we know. By chance, someone breaks loose, staggers toward the opening of the cave, sees sunlight, and realizes the limited and false view of reality inside the cave.

This person returns to the cave to say that the vision that we have spent our lives focused on is only a shadow of the real truth. Unfortunately, to those who have never seen anything else, the message sounds crazy. So naturally, they declare him insane and put him out of his misery.

Plato’s story helps describe a population of managers pleased with what they already have. No need to consider anything else. They will sit there until getting blindsided by competition. They do not realize that if competitors are getting better and they are not getting better, they are getting worse, on their way to losing. The prospect for cave dwellers is as simple, challenging, and scary as that!

Light chasers are the polar extreme of Cave Dwellers. These managers remind us of children who are tricked by the “light game.” One clever kid shines a flashlight against a dark wall and dares the others to catch the light, saying, “When you catch the light, you win.” The chasers run toward the wall, but just before they get to the beam of light, a flick of the wrist by the flashlight holder starts the whole chase over. Most kids smarten up and learn that this is not a game worth playing.

Too many managers are chasing the light. The difference is that the light is now the latest and most fashionable technology. Light Chasers are digital fashionistas, living by the credo, “Buy the latest, and you will be the greatest.” But technology is not as Light Chasers would like to believe an end in itself. Therefore, they often fail with the implementation, looking to the next “big thing” before they learned to use what they just bought. By accident it happens they are successful, just like monkeys picking out the best shares.

Pathfinder’s focus on serving more customers more profitable. They recognize that digitization is a driver of business advantage, so they look for solutions meeting their organization’s business goals with that as a basis. For them digital transformation as both a strategic and tactical capability.

Impossibility is not part of their vocabulary, and neither is naivety. Pathfinders asks the right questions: How can we win new customers? What digitization opportunities are best for us? They are proactively pushing forward; taking adequate digital technology to production as fast as possible.

If others – after the fact – find the pathfinder being on the winning path it is much appreciated. Such affirmations will yet not make them believe they found the ultimate solution. Above everything, they are pathfinders. It is among the pathfinders we find the winners and fast followers.